One option is to use a pre-existing tarot spread, such as the ubiquitous 10-card “Celtic Cross” option. Shuffle the cards, lay them out, and do a reading just as you would for a real person. As you go, write up the details of this imaginary character.

Instead, you could use a spread designed just for characters to make sure the reading is appropriate to what you want to do with it. Here we present you with just such a design.

You can choose to lay down multiple cards instead of any single card. You might do this to clarify something that doesn’t make sense or seems ambiguous; to add detail to something that you can’t quite nail down yet; or to give the character multiples of something (such as friends, enemies or family members).

The character’s core is her central concept or conflict. This card represents her most definitive characteristic, attitude, experience, or ability. If you had to sum up your character in one line, this is where you’d find that line.

This card governs the character’s personality, mood, emotions, and/or attitudes. How does she view the world around her? How does she react to events that occur in her life? How does she handle stress, fear or anger? Does she have a sunny or sour disposition? Again, remember that images on the cards can be taken either literally or metaphorically when making interpretations.

Does the character keep in touch with any family members, and if so, what are they like? This card represents either the family members she keeps in touch with or her relationships with them. Remember to ask yourself what role these characters can play in her life, past and present, and whether they have a role to play in the future of your game or story.

Tackle this the same way you did part 4. Some of these friends may be from the past, and might have shaped who your character is today. Some of them could turn out to be minor characters, sidekicks, and so on in your book or game. Others could represent future plots and plot hooks. Again, ask yourself what role these people have to play and how the card represents them. If the card seems to represent a negative relationship, then perhaps the friendship is souring or began as enmity and then turned into a friendship.

Same as family and friends. If the card seems to represent a positive relationship, then perhaps the character’s enemy was once a friend, or the relationship is more of a friendly rivalry rather than out-and-out enmity.

This card represents those experiences in the character’s life that have most shaped who she is today. These might be small or large in scope, but regardless, somehow they’ve strongly impacted her development and attitudes. Look to cards 1, 3, and 4 to help you here; you might be able to use this card to expand on some of the ideas you came up with there (or vice versa).

This card is meant to help you come up with ways to tie your character into the party of player characters (if in a roleplaying game) or the rest of your ensemble cast (if in fiction). Analyze it for potential relationships between this character and the others.

This is an optional secondary spread you can use to expand on details. Stick with just the first spread if you have enough material already or you want a not-too-detailed character; use this if you want a character with lots of depth and plenty of plot hooks. If you look at card number 9 in the image, you’ll note that I’ve shown multiple stacked cards. You can apply this to any of the items below that sound interesting, that you want more than one of, or that you want extra detail for. This lets you expand the reading to allow yourself as much detail as you desire. 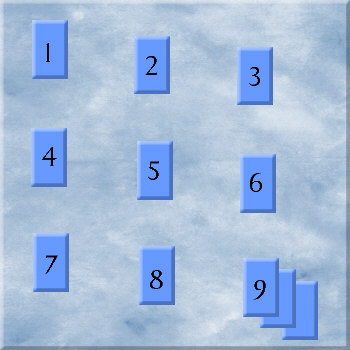 This card represents one or more fears and/or dreams your character has. What did your character want to be when she grew up? What nightmares does she have? What makes her cry or laugh? What does she wish she could do that she can’t? What is her secret dream and what would she do to attain it? What is her worst fear and what would she do to avoid it?

What sorts of hobbies and interests does your character indulge in? Does she collect things? Does she work a craft of some sort? Is she good at it, or does she do it just for the fun of it even knowing she’s bad at it?

Everyone has their blind spots, their flaws they’re unaware of. Everyone has a breaking point of some kind. What weaknesses does your character have? What could break her?

If you’re looking for more of your character’s history than just one or two major, formative experiences, this is where you look. Here you’ll find incidents and events both major and minor that have affected her in some way.

What kinds of agendas does she have? Does she have any long-term goals, perhaps political or philosophical in nature? Is she an idealist, fighting for a cause?

Each card you place here represents at least one plot hook the game master (GM) can make use of (in an RPG) or that can be turned into a side plot or complication (in fiction). In the former case, make sure that you leave enough wiggle-room that the GM can use the plot hooks when and where he sees fit, adapting them to suit his material. Keep them short and flexible. In the latter case, make sure you adapt them to mesh seamlessly with your primary plot material so the added complication or plot doesn’t look tacked on.

We hope you’ve enjoyed our character spread and that it comes in handy when making characters!