Not long ago a friend convinced me to watch the Food Network show, Chopped. In case you aren’t familiar, the idea is that four chefs compete through three rounds–appetizer, entree, and dessert–using four ‘mystery ingredients’ in each round to create quick, creative, delicious, good-looking food. The idea of making do with what you have is compelling. It’s something that appeals to the practical home cook in us, and it provides a delightful challenge for those of us who want to push ourselves a bit. As the subtitle shows: The Chopped Cookbook: Use What You’ve Got to Cook Something Great

aims to teach us to do something a little bit similar. (Unlike the show, there isn’t a tendency to include one gratuitous processed ingredient just to make things difficult!) Thus, when I had the opportunity to review the cookbook, I just had to give it a shot.

The divisions in the cookbook aim to teach you multiple ways to prepare single main ingredients. For instance, there are entire chapters for pasta, eggs, chicken, ground meats, salads, fish, and grains. There’s a short dessert chapter as well, and one for quick ways to prepare vegetables of all kinds. There are also a few charts spread throughout, such as a master recipe for salad dressing accompanied by an entire chart full of specific dressings. The chart is broken up into vinaigrettes vs. creamy dressings and includes things like a bacon-citrus vinaigrette, a spicy Asian vinaigrette, a buttermilk-herb dressing, and a blue cheese dressing, for a total of 17. And of course you can create variations on these 17 with whatever you have on hand for an even wider variety. There are also a few pages that give a four-ingredient ‘market basket’ selection and then show three quick separate recipes you can make from the ingredients. For example, tart apples, kale, almond butter, and skinless boneless chicken breasts become: grilled chicken banh mi with almond mayo and pickled apple kale slaw; almond fried chicken with roasted kale and apples; and spicy African chicken and almond stew. It’s a great way to show by example.

I find the recipes to be very appealing. The ground meats chapter includes such delights as Cajun spiced burgers, pork and egg stir-fry with broccoli, pork barbecue meatball sandwiches, meat and collards pizza, and Turkish chicken tacos. In this chapter you’ll also find a page providing three easy ways to jazz up meatloaf. The “flash in the pan” chapter includes a page for making pot roast more interesting. Much like the market basket pages these include three different quick-and-easy recipes, and again they’re perfect for demonstrating what you can do to turn a handful of ingredients into something new and delicious. 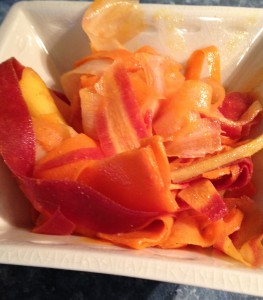 The chapter on vegetables is one of my favorites. It’s organized alphabetically by vegetable, and each vegetable comes with three simple recipes (again), each of which is based on just a few main ingredients. There’s a cauliflower and cannellini bean mash that substitutes beautifully for mashed potatoes. There’s a Moroccan carrot salad that has a surprisingly nuanced flavor, and refrigerated leftovers lasted much better than I expected; I highly recommend making it with rainbow carrots for the presentation value, as in the photo above. The only recipe that didn’t come out well (obviously we haven’t tried all or even most of the recipes yet) was the salt-roasted beets with horseradish sour cream (images below). The salt-roasting left the beets inedibly salty, but the sour cream sauce was so good that next time I’d just roast the beets normally and serve with that sauce, so it only half-counts as a failed recipe. 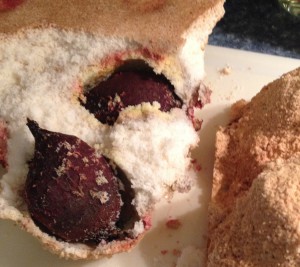 I particularly enjoy the dessert chapter even though it isn’t long. In the spirit of the Chopped kitchen make-do-with-what-you-have attitude, we made the thin lemon pancakes with sweetened sour cream and blueberries with cherries instead, and it was lovely. We made the warm salted caramel banana pudding as stated, but then we made it again with blueberries. I didn’t expect that to work, but it turns out that it does as long as you only cook the blueberries in the caramel long enough to make them dark and plump, but not long enough to make them burst (maybe 30 seconds or so).

Another wonderful resource is the list of useful ingredients to keep on hand that’s found in the front of the book. Normally I don’t get much out of these, but the secret here is how they’re organized. Need a touch of savory flavor in your dish, but not sure what to use? There’s a list of salty and savory additives to cover you. Other lists include tanginess, crunch, acidity, and richness. It’s a great way to help you balance your flavors.

We fully intend to continue making use of the Chopped cookbook long after we’ve reviewed it, which is the mark of a truly good cookbook. I found it inspiring with regard to the ‘use what you’ve got’ mantra, which kind of surprised me. The folks who put together the cookbook clearly cared about more than cashing in on the show’s name.