Pros: Lots of pretty pictures and some creative healthy dishes
Cons: Variable quality
Rating: 4 out of 5

My New Roots: Inspired Plant-Based Recipes for Every Season

, by Sarah Britton, is a good cookbook–it just isn’t a great one. It’s big on plant-based foods, and (in many cases, though not all) raw foods, things which I could certainly stand to eat more of. The pictures are lovely and the recipe layouts are decent and easy to use. The recipes certainly sound enticing: roasted red pepper walnut dip; sorrel hummus; buckwheat crepes with creamy string bean slaw; pear apple blackberry crumble; rooibos-poached pears with raw chocolate olive oil sauce. Most ingredients are easy to find, particularly with all the farmers’ markets and health-food stores cropping up. Chia seeds are fairly easy to find now, and you can raid rooibos tea bags for what you need for the pear recipe.

Many of the recipes use maple syrup as a sweetener. I prefer to use honey where possible–the sweetener is usually a small enough amount in these recipes that the flavor of the syrup would be lost. I grew up in Vermont, so I’ve had all sorts of maple syrup, and I wouldn’t waste it on something where I wouldn’t be able to taste the maple flavor. Particularly given how expensive it can be.

We made three recipes out of this cookbook. Usually lately I remember to take at least one photo of each dish, but in this case I forgot for two of them. Of course the one I remembered to take a photo of is the least photogenic: a lentil salad. The recipe is called “The Best Lentil Salad Ever”, and is good enough that I won’t scoff at the name. I would absolutely make this again, and probably will–it’ll make a great lunch salad. It’s one of those recipes that look complicated when you see the long list of ingredients, but almost the entirety of those ingredients are spices that go in at the same time. There’s a really nice complexity of taste here. 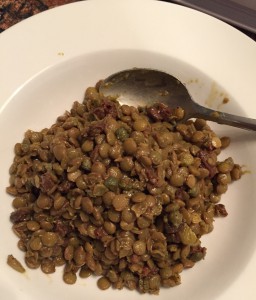 Next we tried the “Fully Loaded Breakfast Bars”. They include gelled chia seeds, oats, a little leavening, a bean puree, applesauce, dried fruits, and so on. The taste was decent, but the texture left a lot to be desired. These were very dry. They weren’t too bad to eat, but we certainly don’t intend to make the recipe again. These are just… odd.

We’ve been getting a CSA (farm share) this summer, so we’re never entirely sure what we’ll be bringing home. This last weekend we got radishes and a particularly sweet and tender variety of turnip. We ended up making the shaved turnip and radish salad with poppyseed dressing. It’s a lovely little salad, but I’d probably look for a different one next time. I think I’ll always prefer my asparagus roasted rather than raw (I don’t think I’ve ever had it raw before this recipe, actually). I doubt I’ll make it again, but I could see making variations on it–maybe raw pepper instead of asparagus.

We did find some good recipes in here, but those ‘breakfast bars’ have made me wary of the author’s other, similar types of recipes. This is a lovely book, and we’ll probably try out a couple more recipes from it, but I don’t think it’ll end up in our bundle of cookbooks we use repeatedly and frequently.