Pros: Best blueberry pie ever!
Cons: Definitely not a book about taking shortcuts.
Rating: 4.5 out of 5

Kristen Miglore’s Food52 Genius Recipes: 100 Recipes That Will Change the Way You Cook

is about finding the little (and not-so-little) tricks that turn good recipes into great recipes. It includes everything from complete recipes to smaller tips and tricks. Recipes range from no-knead bread, to warm squash and chickpea salad with tahini, dry-brined turkey, mushroom bourguignon, fried asparagus with miso dressing, and even strawberry shortcakes. These recipes come from all over the place; for instance, the strawberry shortcake is a James Beard recipe.

Recipes are formatted well; it’s easy to tell the opening monologue from the ingredients from the recipe steps. Each opener has interesting information on where the recipe comes from, how it works better than others of its kind, etc. Some very pretty photos are included.

We tried several of the recipes. One was a recipe of spiced braised lentils and tomatoes with toasted coconut. It’s a simple recipe, although not everyone will have access to the black or brown mustard seeds. It was great the first night, but it’s only okay as leftovers. The ‘trick’ in this one is to cook the dry lentils in strong flavors before adding liquid, in order to really get the flavor into the lentils. I’m not sure it made that much of a difference over other lentil dishes I’ve tried. (I’m fond of lentil dishes so I’ve tried a lot of them.) 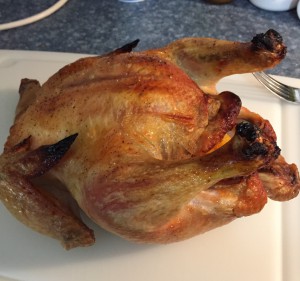 The simple roast chicken worked much better than I thought it would. You simply roast it at 500 F, no basting. I was sure our chicken would end up with blackened skin, but it came out perfectly. Since we currently tend to go through a roast chicken every couple of weeks, this is a nice discovery. A tip next to the recipe points out that the one difficulty is spattering (leading to smoking), and points out that you can put some chopped potatoes or other hardy vegetables to the pan where they’ll cook in the juices and prevent spattering. We tried that and were quite pleased by the results. 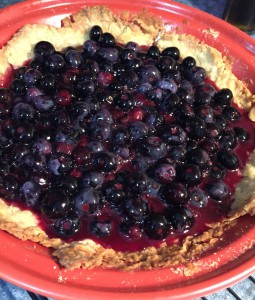 Our absolute favorite recipe from this cookbook was a fresh blueberry pie. I had a hard time imagining how it could make much of a difference over all the other blueberry pies we made, but I have to admit this really was the best blueberry pie I’ve ever eaten. The crust is made extremely flaky through the use of frozen butter. In rolling the butter into the dry ingredients the recipe resembles the instructions for making puff pastry, and that isn’t a coincidence. This is not an easy step, and certainly not a step that someone with arthritis or tendinitis in the hands could do.

It isn’t just the super-flaky crust that made the pie so good, though. Instead of baking all the berries in the pie, you pre-bake the pie shell and that’s it. You take one quarter of the blueberries, cook them down to jam, and thicken with cornstarch. You fold this into the other, uncooked blueberries, fill your pie shell, and allow to set for a couple of hours. It gives you the best of both worlds: a thickened filling that has that perfect fresh, bursting berries flavor.

I don’t think of every recipe in here as having some mysterious ‘genius tip’ that will make the recipe better than others of its ilk. I’ve had better lentil dishes than that one, for instance. But frankly, that pie alone makes it worth learning the book’s techniques, and there are plenty of recipes that really do have that working genius step. I think we’re going to have to make that blueberry pie again soon.