Have a half cup of pumpkin puree left over from making Thanksgiving dinner? Here’s something to do with it!

I’m a huge fan of custards, puddings, creams, etc. I realized I had a can of pumpkin puree sitting around that I’d never used, so I went looking for a pumpkin pudding recipe and found this one. The first time I followed the recipe, it came out thin, like a sauce. But it was tasty enough that I was determined to work with the recipe to adapt it rather than looking for an entirely new one. The second time I made the pudding I added an extra egg yolk and another tablespoon of cornstarch, but it broke slightly–still edible, but not something I would serve to guests. I probably either failed to temper the egg yolk mixture enough or had the pudding on too high a flame on the stove.

Here’s the ultimate recipe, with a few tips and thoughts on custard-making after the photo:

Pour the half-and-half into a saucepan on the stove.

In a medium-sized bowl, whisk together the egg yolks and light brown sugar until thick and pale, about three minutes. Whisk in the vanilla. Whisk in the cornstarch, salt, cinnamon, allspice, and nutmeg. Whisk in the pumpkin puree and maple syrup.

Heat the milk gently until scalding hot, but do not boil. Gradually drizzle the hot milk into the egg yolk mixture, whisking vigorously (otherwise the eggs will scramble and your pudding will break). Pour the mixture back into the saucepan and stir constantly over medium heat, being sure to scrape the bottom and sides of the pan so the mixture doesn’t burn. Heat for 8-10 minutes.

The mixture should start to thicken after 5 minutes or so, as it comes to a simmer (try to keep it to a simmer rather than allowing it to come to a full boil). Once it has started to thicken, allow it to simmer for two minutes (still stirring), then strain through a fine-mesh sieve and put into serving dishes or a storage container. Press a sheet of plastic wrap onto the surface of the pudding (this prevents a skin from forming). Cool to room temperature, then refrigerate until cold. Serve with whipped cream if desired. 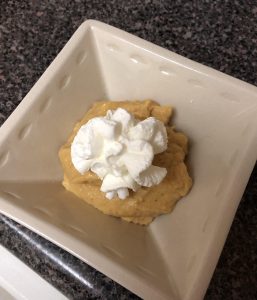 Here are a few thoughts on puddings and custards if you haven’t worked with them much before. They can be tricky, so it’s good to practice before making them for guests. Don’t worry if a batch goes wrong; it happens. Since they need to be chilled, you can get enough ingredients to make the recipe over several times and make it the day before. The particularly tricky thing with this one is that you don’t want to scramble the eggs (hence tempering them gradually with the hot milk), but you need to bring the mixture as a whole to a simmer to get the real thickening power of the cornstarch.

Gas stoves and electric stoves work very differently, and that comes into play with this sort of recipe. If you’re using an electric stove and you turn up the heat too high when heating the milk, you won’t be able to turn it down quickly to gradually heat the pudding. Same if you heat the pudding as a whole too quickly and then try to turn it down once it reaches a simmer. If you’re using a gas stove and aren’t used to using it for delicate tasks, it’s easy to end up overheating things. (And not all gas stoves can be turned down all that far. If yours has a “simmer” burner, you’ll probably want to use that.)

Enjoy your pudding! Next I might work on a chocolate version.